I found out about this late in the game, and I'm unfortunately going to be out of town for it, but artists Robert Crumb, Art Spiegelman, and Françoise Mouly will all be in Austin next month for a one-night-only discussion about comics, art and culture. Spiegelman is best known for his autobiographical comic Maus, and Crumb is (in case you're not familiar with comics that aren't Batman) probably as much a celebrity as it's possible to be in the world of underground comic art. Crumb's newest work is an illustrated version of the Book of Genesis. 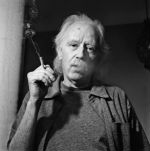 With a long list of genuine, certified classics (um… Halloween, Christine, The Thing, Assault on Precinct 13), as well as a solid roster of cult faves (Escape from New York, They Live, Big Trouble in Little China), Carpenter is pretty much a living legend. His synth-powered fright flicks and gritty action comedies are usually brilliant, and always fun. And the prospect of having him autograph a They Live poster makes my inner fanboy smile. I even loved Vampires, his roundly panned bloodsucker flick starring James Woods.

I visited the TFW convention in 08, and it was pretty good. The venue was a little bit odd, and the film screening setup was lackluster, but everything else was good, and they’ve moved since then, so who knows. A bit of advice though…if you’ve got the extra money and you love autographs, get a fancy VIP badge. Not having to wait in line could literally save you hours.

Other guests for 2010 include George Romero, William Katt (House and House IV), Lance Henriksen (Pumpkinhead, Near Dark, Aliens), Kane Hodder (Friday the 13th), Sid Haig and Bill Moseley (those Rob Zombie movies and whatnot), Margot Kidder (Superman) and Doug Bradley (Hellraiser). The convention runs from April 30 to May 2.

Wow–I can’t believe I’ve gone this long without knowing that a huge archive of Kubrick-related links existed. I could seriously spend hours looking through all of this and never get bored. Kubrick was a rare bird, and I’m deeply intrigued by him–what’s surprising, though, is the sheer volume of critical and biographical material he’s inspired.

Two major events in the realm of online viewing: the first is today’s online premiere of Crawford, a locally produced documentary about the tiny Texas town that GWB chose to adopt as his “home” (Bush was born in Connecticut, and spent his formative years in Houston and Midland). The film was acquired by Austin-based B-Side Entertainment, and was released simultaneously on Hulu, iTunes and Amazon. I personally hate the Hulu player (it’s way too intrusive and distracting–but hey, it’s free), but Amazon’s unbox service is much less annoying, and hopefully B-Side will soon offer a paid download. B-Side’s service is great, and they offer mobile and DVD definition versions at (in my opinion) appropriate price points.

The other big news (yes, I’m two weeks behind on this one) is the online release of Michael Moore’s 2004 election doc Slacker Uprising. Moore is, unarguably, a popular filmmaker, and for him to buy back the North American rights for the flick from Harvey Weinstein just so he can give it away online is a pretty big deal. Read Luke Quinton’s fantastic piece on Slacker Uprising here.

This Sunday, the Alamo downtown will present a single screening of Roman Polanski: Wanted and Desired, a documentary portrait of the brilliant director and sometime lecher.

Apparently, the film focuses heavily on the infamous, circus-like statutory rape trial that led to Polanski’s self-imposed exile. But it also explores the Polish director’s turbulent early life, including his time in a German concentration camp, and the brutal murder of his wife, Sharon Tate, by the Manson Family.

Whatever you think of Polanski himself, the guy has led had an amazingly interesting life, and I’m interested to see how he’s presented here.

UPDATE: This will actually be playing a few times next week. I’m dumb. Got tickets for Sunday, though. 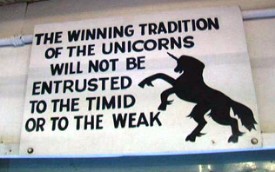 Unicorn Pride is a short documentary about a Central Texas high school football team with, you guessed it, a Unicorn as their mascot.

The film doesn’t delve into the history of the school or of the “Unicorn” name–it’s more like a quick snapshot of a typical Friday night in New Braunfels (just outside San Antonio). In some ways, it plays like “Football Game Parking Lot”, which sometimes works well and sometimes doesn’t.

Anyway–the juxtaposition is way too hilarious for me. As soon as I get a chance, I’m running out to New Braunfels to get a “Unicorns Football” t-shirt. It’ll go nicely with the “Beaver Area Football” t-shirt I got in Beaver PA a few years back.

The Austin Chronicle is holding their yearly “Best of Austin” poll. So if you live in Austin, or are a regular Austinist reader, I’d like to respectfully request that you vote for us (Austinist.com) in both “Best Local Website” categories. Cuz hey… I’d vote for you.

I’m in the process of moving my long-ignored angry robots blog to wordpress. It’s gonna take a few days to get things set up and looking half-decent, so please don’t give me any shit about it.

Lester Bangs once said of the Dead Kennedys that their fans didn’t really understand them; that even if the Kennedys were earnest in their political views, it didn’t matter because people only came to their shows for the “goon brutality.” And he was right. Just look what happened to punk: it was misunderstood, watered down and rendered near-useless by its own following. It rotted from the inside out. (For hard evidence, go see Propagandhi on their upcoming tour and count the number of times you hear some asshole say, “I wish they would just play the music and not talk so much”. Less Talk, More Rock, right?) And it seems like the same thing has been happening with horror films over the past decade or so.

Don’t get me wrong, I’m glad that horror has made such a comeback in the mainstream, but it seems like the genre is being reshaped by people who never really understood it in the first place. Case in point is the 2003 remake of Texas Chainsaw Massacre; just the fact that someone would even consider that TCM should or could be made better says a lot about the state of things. Now we can make things bigger, louder, sexier! Won’t that be great? And the final product speaks for itself – a chunk of bland, formula garbage that thinks it can impress us with slicker violence, sexier women and more sadistic villains. It’s horror stripped down to the most obvious surface elements – Less Talk, More Rock.

I’m not saying that horror used to be some brainy, intellectual endeavor, but it seems to have lost nuance over the years. One of the reasons the original TCM was so great was that there was no fucking explanation. These monsters, these horrible things, existed without cause, seemingly as part of the natural order. Animals get hit by cars, people get killed by chainsaw-wielding maniacs. It’s survival of the fittest, right? Chainsaw’s reality was terrifying, yet completely believable – inevitable, even – and that’s what made it so scary. We saw the truth in it.

After that long preamble, it probably goes without saying that I was very skeptical of a “new” TCM that attempts to explain the unexplainable with an MTV gloss- especially when it’s made by a guy whose major directing credit is Darkness Falls. But as it turns out, TCM The Beginning isn’t as awful as I expected it to be.

Despite a painfully lame “birth of Leatherface” scene in the first five minutes, TCM The Beginning moves the Hewitt family into craziness and cannibalism relatively smoothly and convincingly. The short version is this: in some dying backwoods Texas burg, the few remaining inhabitants decide to take over the town and play by their own rules. Sickened by what’s become of the outside world, they resolve to remain in self-imposed isolation at their creepy farmhouse forever. Of course, that means they can’t exactly go out for groceries, so when a gang of teenagers stumbles onto their turf, they torture, kill and eat them.

Shot at a gorgeously creepy farmhouse outside of Austin, TCM The Beginning is as visually impressive as any modern horror flick. The colors are nicely washed out, the locations are eerie and every frame seems like it’s covered in a layer of dirt. There is some decent gore for the hardcore splatter fans, and director Jonathan Liebesman has certainly brought the franchise into the age of “pornographic violence” (as he called it during a recent appearance in Austin), for better or worse.

R. Lee Ermey is absolutely perfect as the cracked uncle who corrupts his disfigured oaf nephew into murder and mayhem, while the rest of the characters are fairly appropriate background noise for his lunacy. Though Ermey plays the same character in almost every film he’s in, this particular incarnation seems to work well; brutal, remorseless and sociopathic, yet recognizably human, and even occasionally funny. Part of Ermey’s charm is that he can make you laugh while someone’s legs are being chopped off onscreen. If anything, he carries the film, elevating it from a pointless gorefest into a reasonably fun film. The film focuses more on him than it does on Leatherface, so if you’re not an Ermey fan, you might as well stay home.

TCM The Beginning isn’t great, so don’t expect to walk away without some complaints. But unlike the 2003 remake, this installment is just as fun and self-aware as it is gory. There are moments of genuine humor, tension and horror, and it’s certainly one of the better installments in a series that contains some of the worst films of all time; does anyone remember Texas Chainsaw Massacre: The Next Generation? Hmm? I see you hiding over there, Matthew McConaughey.