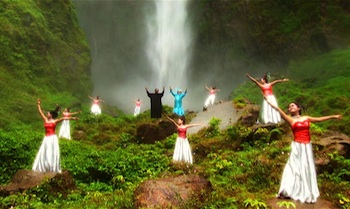 Try this: read Errol Morris’ essay “The Murders of Gonzago”–a long, but riveting piece on the Indonesian mass killings of 1965, and Josh Oppenheimer’s documentary The Act of Killing, which interviews the killers at length, and invites them to reenact their crimes–in the style of their favorite Hollywood films–for the camera.

If you’re as intrigued by the essay as I was, you’ll want to follow up by watching Morris and Werner Herzog talk to Vice magazine about the film, to which they lent their names as executive producers.

If, after doing both of those things, you’re confused and intrigued and unnerved, you’re probably still only half prepared to actually see the thing.

At its core, The Act of Killing is a morbid but surprisingly goofy exploration of a violent chapter in Indonesia’s already checkered history. But as the minutes roll by, the narrative dissolves into a frustratingly long list of hanging threads.

What are the limits of self-deception? Of memory? Where do person and persona overlap? Are we defined by our worst deeds? Our mistakes? How and when can we be redeemed? These are complex questions, with surprisingly elusive answers. And Oppenheimer’s mostly hands-off, almost darkly comic approach lends the whole affair a thoroughly disturbing and undeniably surreal vibe.

The Act of Killing isn’t a film you’ll enjoy. Enjoy isn’t the word. But I guarantee you haven’t seen as affecting or thought-provoking a documentary in, well, ever.