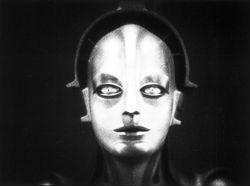 Just last week, the restored version of Fritz Lang’s Metropolis premiered at the Berlinale, with a live score performed by the Rundfunk-Sinfonieorchester Berlin. Apparently this new version contains nearly 30 minutes (!) of new footage that was discovered in Buenos Aires around two years ago, and it’s supposedly quite close to the original cut. The discovery of this new footage is pretty much a miracle, and the Berlinale screening was so hotly anticipated that it was simulcast on German television and via the web (though I couldn’t watch it at the time, and it’s still not clear whether it was even available outside of Europe).

In any case, on Friday April 9th the folks at the Alamo Drafthouse will screen the film at the decommissioned Seaholm Power plant. In itself a work of industrial art-deco beauty, the Seaholm just might be the perfect setting for this 1927 dystopian sci-fi masterpiece (and this could be a good chance to visit the plant while it still has some genuine charm–it’s currently being developed into a Domain-like yuppie mall). To sweeten the deal, a live score will be performed by Austin’s Golden Hornet Project.

The screening isn’t until April, so there is no word on tickets yet. But I’ll keep you posted. Note that the event page doesn’t specify “newly restored version”, I’m just assuming that’s what it’ll be.