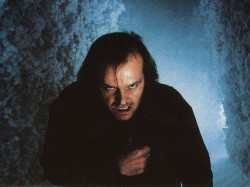 **Note: this is the first in a long-planned series where I explore Netflix’s “Watch Instantly” archive looking for great movies. Very recently, Netflix removed the time limits for all subscribers, so we can watch as many movies as we want, through the internet. And I do.

Last month, I mentioned that I was re-watching some Stanley Kubrick films in an effort to better understand their links to There Will Be Blood. Well, it turns out that two of Kubrick’s masterpieces, The Shining and 2001: A Space Odyssey are both available for instant viewing on Netlifx.

There has never been a doubt in my mind that The Shining is a brilliant film. Though it may not be the best adaptation of the book (Stephen King famously criticized it for ignoring what he felt were important themes in the original story), when considered on its own, it’s still a fantastic bit of suspense horror.

On the other hand, I’ve never completely appreciated Kubrick’s 2001 until my most recent viewing. I hadn’t seen it in a very long time, and the costumed ape characters in the “Dawn of Man” scene certainly seem hokey 40 years on. But outside of that single, obvious weakness, 2001 played like the best, most rewarding noise album. And in fact, what I noticed most (when considering 2001 as a relative of TWBB) was the soundtrack. In There Will Be Blood, Johnny Greenwood’s score is often the opposite of music–it’s dissonant, moody noise, meant to annoy and enrage as much as provide musical roadsigns. 2001 treats its soundtrack much the same way. In fact, most of the soundtrack isn’t even music; it’s repeated bleeps, high-pitched hiss and carefully placed silence. In this way, it’s one of the most challenging (but ultimately rewarding) soundtracks in popular cinema.

John Cage once said, “If something is boring after two minutes, try it for four. If it’s still boring, then eight. Then sixteen. Then thirty-two. Eventually one discovers that it is not boring at all.” And I’ve found this to be completely accurate. Some of the most rewarding musical and cinematic experiences are the ones that require patience to appreciate, and outright work to enjoy. 2001 fits this description exactly, demanding the viewer’s patience, sometimes without offering any recognizable reward. And yet, if you simply let it unfold without demanding immediate satisfaction, you’ll find all manner of things to love. The exact same thing can be said for There Will Be Blood.

At the time of this writing, The Shining and 2001: A Space Odyssey are both available for instant viewing on Netflix.