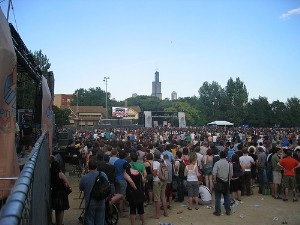 The Pitchfork Music Festival is–pound for pound–my favorite outdoor festival. First, there’s the price: fifty dollars for a three day pass, and access to all kinds of cheap food once you’re inside the gates (a huge bottle of water will cost you a dollar, which is such a simple but awesome thing that it might be reason enough to love the PMF). Then there’s the setup: two main stages side-by-side, alternating hour-long sets. There’s very little wait between sets, and it’s easy to catch virtually all the bands you want to see without having to run from stage to stage (there’s a “sidestage”, but the sets are offset by thirty minutes, so you can easily catch half of a sidestage set without missing much). The there’s the lineup: Pitchfork aims for quality rather than quantity, and there are very few gaps between awesome bands. It could be bigger (and more profitable), but it isn’t, and that’s really cool.

Friday night, Sonic Youth performed Daydream Nation in its entirety, and I probably don’t have to tell you how amazing it was. It didn’t completely translate to a big outdoor stage, and the “noise jam freakout” level was low (think old SY though the lens of new SY), but goddamn it was good to hear those songs live. When the “Teenage Riot” riff came in, I was so excited I thought I might cry. Slint were good too, but again I thought they might have been better in a club. Some music just isn’t meant for big outdoor stages. GZA was kind of low-energy–ten dudes on stage, none of them particularly useful or even excited to be there. Definitely the low point of the evening.

Saturday had some great stuff; Girl Talk was a lot of fun, despite the fact that he doesn’t really do anything but watch his laptop play the mixes. Clipse were really impressive–I didn’t expect them to be anywhere near that good, but every song came off brilliantly. Battles were fantastic too, though they’re a lot different live than on wax; instead of cold precision and pulsing electronics, they’re all bombast and noise and frenetic energy. What I saw of Dan Deacon and Mastodon was good too, though most people didn’t seem to understand the metal. My only regret Saturday is not getting closer for Grizzly Bear. I like that band.

Sunday we caught some of Menomena, who were kind of meh. Junior Boys were a nice change of pace, and much more exciting than I figured they’d be–they actually do have a live drummer and guitarist. The Sea and Cake were great… I need to get some more of their stuff. Jamie Lidell annoyed the shit out of me, but that was based more on his gimmicky performance than his music (Of Montreal were slightly better in that regard, but not much).

Stephen Malkmus was one of the festival highlights. He played an endearingly sloppy acoustic set to an adoring crowd, and he was joined for two songs by ex-Pavement drummer Bob Nastanovich. I didn’t want him to stop playing. But he was closely followed by the similarly good New Pornographers, who pounded out a raucous closing set of poppy awesomeness–the perfect end to a great fest.

I didn’t have a lot of time to spend in the city, but I did eat at the Billy Goat Tavern, made famous in an SNL skit (You know, “Cheezborger! No fries, cheeps! No Pepsi, Coke!”) and I had some good deep-dish pizza at a place called Pizzeria Due (I ate WAY too much, For real). I also visited the Gene Siskel Film Center (probably the nicest, most modern theatre I’ve ever been in), but didn’t have time to stay for a movie. I really like Chicago a lot. We spent a lot of time walking and riding the el, and it’s a beautiful town. I’m looking forward to going back.