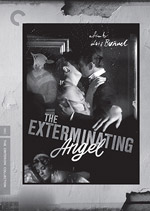 This essay by Alex Cox (Director of many brilliant and underrated flicks like Repo Man and Walker) has got me really, really interested in seeing Luis Buñuel’s The Exterminating Angel, which unfortunately won’t be released on DVD until February. I’ve had Buñuel’s The Discreet Charm of the Bourgeoisie floating near the top of my Netflix queue for a long time now, but I know embarrassingly little about the famed Spanish director. Time to fix that.

My major point, though, is that I love it when criticism is done right. Most people (wrongly, I think) tend to think of criticism as opinion–as two thumbs up or two thumbs down. But when done well, criticism is barely opinion at all; it’s part of a conversation about art, and about life. And when it’s underpinned by a passion for either one of those things, it can be just as important as the films themselves. Maybe even more important. 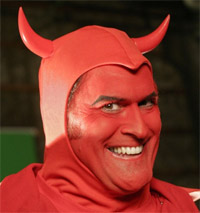 At the Austin premiere of the highly anticipated My Name Is Bruce, I had a drink and a friendly chat with b-movie megastar Bruce Campbell. It was a very last minute thing, and I wasn’t sure it was even going to happen until about ten seconds before it did, so the interview isn’t nearly as good as it could have been. But when you get a chance to talk to someone like Mr. Campbell, you take it. Thank you to Matt and Karen at the Alamo for making this happen on such short notice, and thank you to Ain’t It Cool News for calling in sick and freeing up an interview slot.

Fantastic Fest is so close I can taste it. But since it’s completely sold out, I feel kinda bad for folks who didn’t get badges in time. For them I’ve put together a list of publicly-accessible FF screenings and events. Check it out on Austinist.